Cashews are a great way to give the body the healthy proteins it needs! This nutrient dense tree nut makes for a healthy, smooth nut mylk. A common misconception is that cashews are fatty and therefore not good for you. However, cashews have a lower fat content than most other nuts. Approximately 82% of their fat is unsaturated fatty acids. Plus, about 66% of this unsaturated fatty acid content are heart-healthy monounsaturated fats.

Cinnamon is an evergreen tree characterized by broad oval shaped leaves. The spice cinnamon is the inner bark of the tree that is stripped and dried into “quills”. In ancient Egypt, cinnamon was used to embalm mummies. Cinnamon was kept a secret from the Western world, stories were told to European explorers that cinnamon was fished from the Nile in Egypt and called down from the beaks of birds in Arabia. Indonesia, China, Vietnam, and Sri Lanka produce 99% of the world’s cinnamon.

Our organic dates add natural sweetness to the Om. They contain simple sugars in the form of fructose. This is what makes them so delicious. Dates are an easily digestible sweetener, so they are great for those with an intolerance towards processed sugars. In addition to being an anti-inflammatory, they also contain vitamin A, iron, potassium, and fiber. 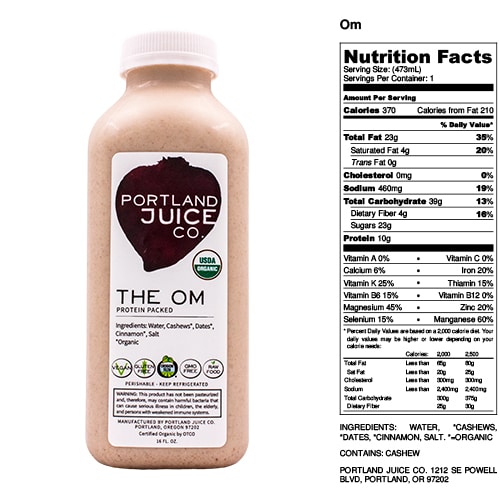